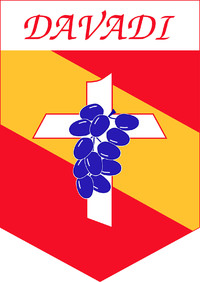 Davadi House was named after Father Jerome Davadi who was the Catholic Priest in 1874 in Stanthorpe.

It has been said of Father Jerome Davadi, that for nearly thirty years he ministered to his flock in Stanthorpe, winning the highest respect and affection and providing them with a high standard of moral conduct, and a model of an industry, earning him the title, by some, of “The Father of the Fruit Industry.”

He is remembered with affection because when meeting members of his flock in the street, he raised his walking stick in the sign of the Cross. He is remembered also for his habit of roaming the hills and planting seeds of fruits that he carried in his pockets wherever he went.

Father Davadi encouraged the value of planting fruit on the Granite Belt to his parishioners, helped with cuttings from his own nursery and often offering financial assistance.  He was able to forsee the problems of settlers as income from tin petered out. He brought knowledge of the culture of vineyards and the making of wine from his homeland of Italy. He converted his horse paddock at the Presbytery into a vineyard. He planted another vineyard at the foot of Mt. Marlay later to become known as “Vichie’s Vineyard. He also acquired further land to plant apricot and peach trees some of which are still alive today.

Fr Davadi’s interests were diverse and his enthusiasm to develop better standards of living for his people was strong. He held the view that the dignity of earning an honest living, and supporting the family was necessary to a man’s well being as well as to his spiritual needs.

On the 22nd January 1900 at the age of 53 years, Fr Jerome Davadi passed away mourned by the people of Stanthorpe. An impressive headstone now marks his grave in the Stanthorpe Cemetery, a tribute from the people he served so long.